The history of the ‘Cor Fawr’ (The Big Choir) is the preeminent story of Caradog’s career. In the beginning of 1872 it was announced that the Crystal Palace Company would hold a weeklong singing competition to compete for the Challenge Cup trophy, worth a thousand pounds, in the Crystal Palace, London. The advert read:

Choral societies not exceeding 500 members and not less than 200 each Society including male and female voices. For the best performance of a selection of choruses. For the best rendering of a piece or pieces (not in the selection to be chosen by the Jury.

To begin it was difficult for the South Wales Choral Union to drum up much interest due to the logistical challenges oforganising, practising and trnasporting a 500-strong choir to London, and it took a long time to take shape. They had considerable difficulty to encourage enough widespread enthusiasm to get the choir off the ground. However, having had several meetings with loyal colleagues and friends, the idea began to gather momentum. It was suggested by Eos Morlais that Caradog was to be the choir leader and conductor, and the idea was passed by a landslide. They began immediately planning for the competition by creating a series of smaller factions of the choir in the populous towns and villages around South Wales in which individual sections of the choir would rehearse. Aberdare was the central hub for the Cor Mawr. The choir learnt five pieces for the first competition in summer 1872. The pieces were ‘Now by Slow Degrees’; ‘The Night is Departing’; ‘In Tears of Grief’;‘In Extu Israel’ and ‘Then Round About Thy Starry Throne’.  In the competition itself they sang:

‘The Night is Departing’

’In Tears of Grief’

‘Then Round About Thy Starry Throne’. 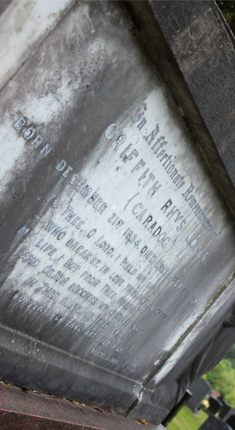 The first note the Welsh choir sang in London from ‘The Night is Departing’, they hit the note so effectively, the band turned their heads in fear and amazement and they were close to getting knocked from their chairs by that almighty Welsh sound. They sang the following two songs, and despite the lack of competition, they were deemed worthy winners of the golden trophy. There is something significant, and beneficial and very beautiful that ‘The Night is Departing’ was the first song by the Welsh choir in London; because since then, throughout the hills valleys of Wales, many nights depart and decamp to the dulcet tones of Welsh choral music.

Following the first competition, a report was presented to the Duke of Edinburgh which read:

As far as it has gone, the undertaking promises to head to good results…The confidence already reposed in the undertaking cannot fail to be still further extended. In the meetings of 1873 the Directors hope to enlarge the basis of their scheme and to embrace circles and interests at present untouched as well as to introduce improvements in the plan of operation, through the experience gained at the meetings just concluded.

He mentions the South Wales choir:

They have also been the means of bringing choirs from Bristol and South Wales and also of giving some four or five hundred singers in the last-named musical part of the Kingdom an opportunity of displaying their fresh and vigorous voices in a new and untried locality.

The day following the competition, the national papers read:

The choir returned again in the summer of 1873 to defend their crown. By this point the choir were much larger and more accomplished. There were six pieces to learn this time  – ‘The Many Rend the Skies’; ‘I Wrestle and Pray’: ‘Day of Judgement’; ‘Hallelujah to the Father’; ‘See what Love Hath the Father’ and ‘Come with Torches’. The Welsh choir were called on first, and they sang –

I Wrestle and Pray

Hallelujah to the Father

See what Love Hath the Father

Then Proudman’s choir from London sang the same songs. On the spot it was decreed that the Cor Fawr were again victorious. The whole of the Crystal Palace erupted into an enormous Welsh furore immediately – it’s likely that neither before nor since, has that sort of fracas of Welsh voice been heard there.

The Welsh Choral Union began their preparations for the 1874 National Music Meetings competition early; they intended to raise money so that Caradog could work full-time with the choir for the entire year. Much to their dismay, the Crystal Palace Group withdrew their support for the competition citing lack of interest in the overall competition, particularly the large choir and band ensemble competitions.